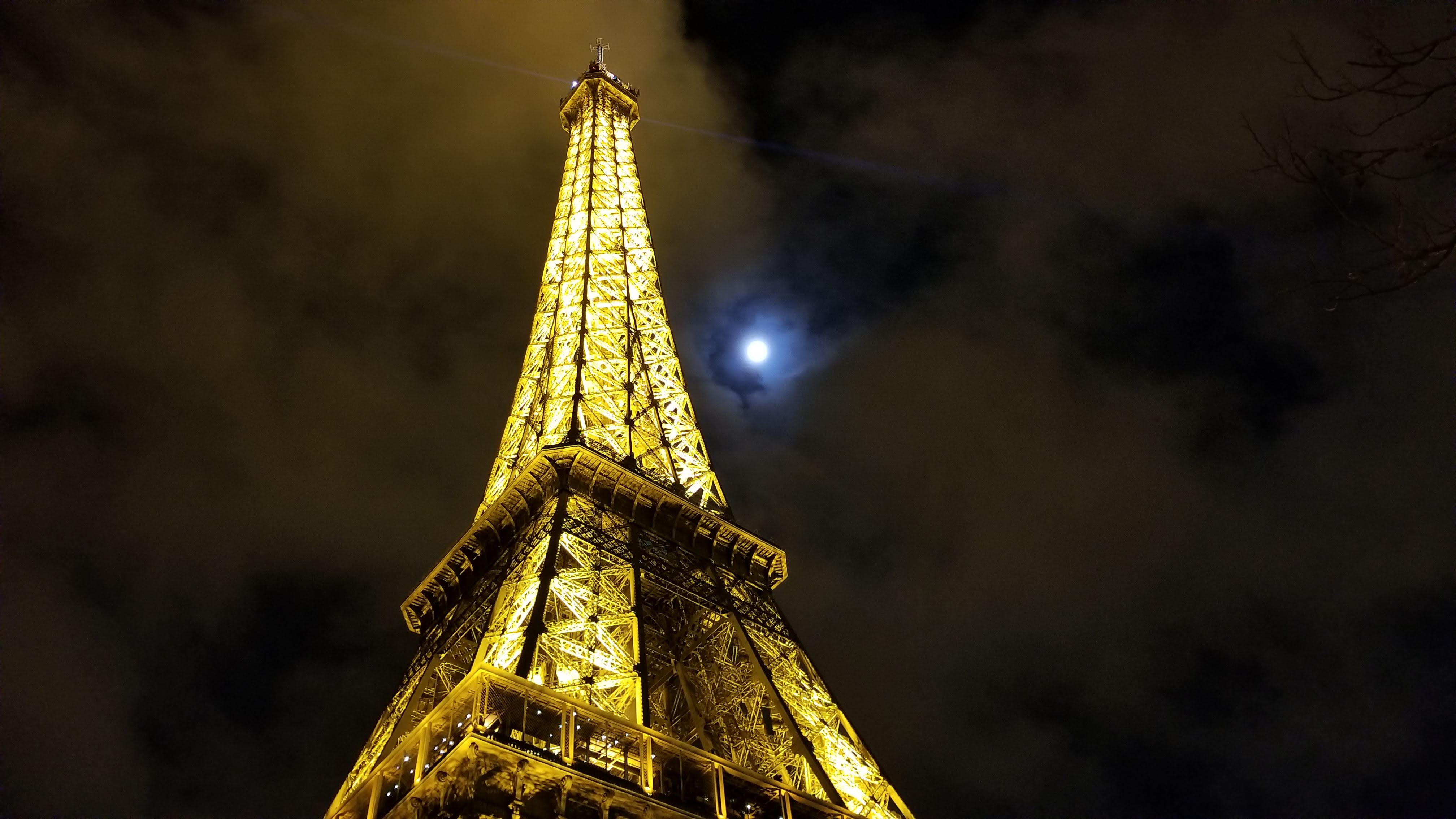 Have you ever had one of those trips that you’d planned for so long that, once it was actually upon you, you were totally incredulous that is was even happening? Sort of like a dream – you’ll wake up and still have a week till you leave. This was going to be that trip for me, I could feel it. Paris was just a myth. 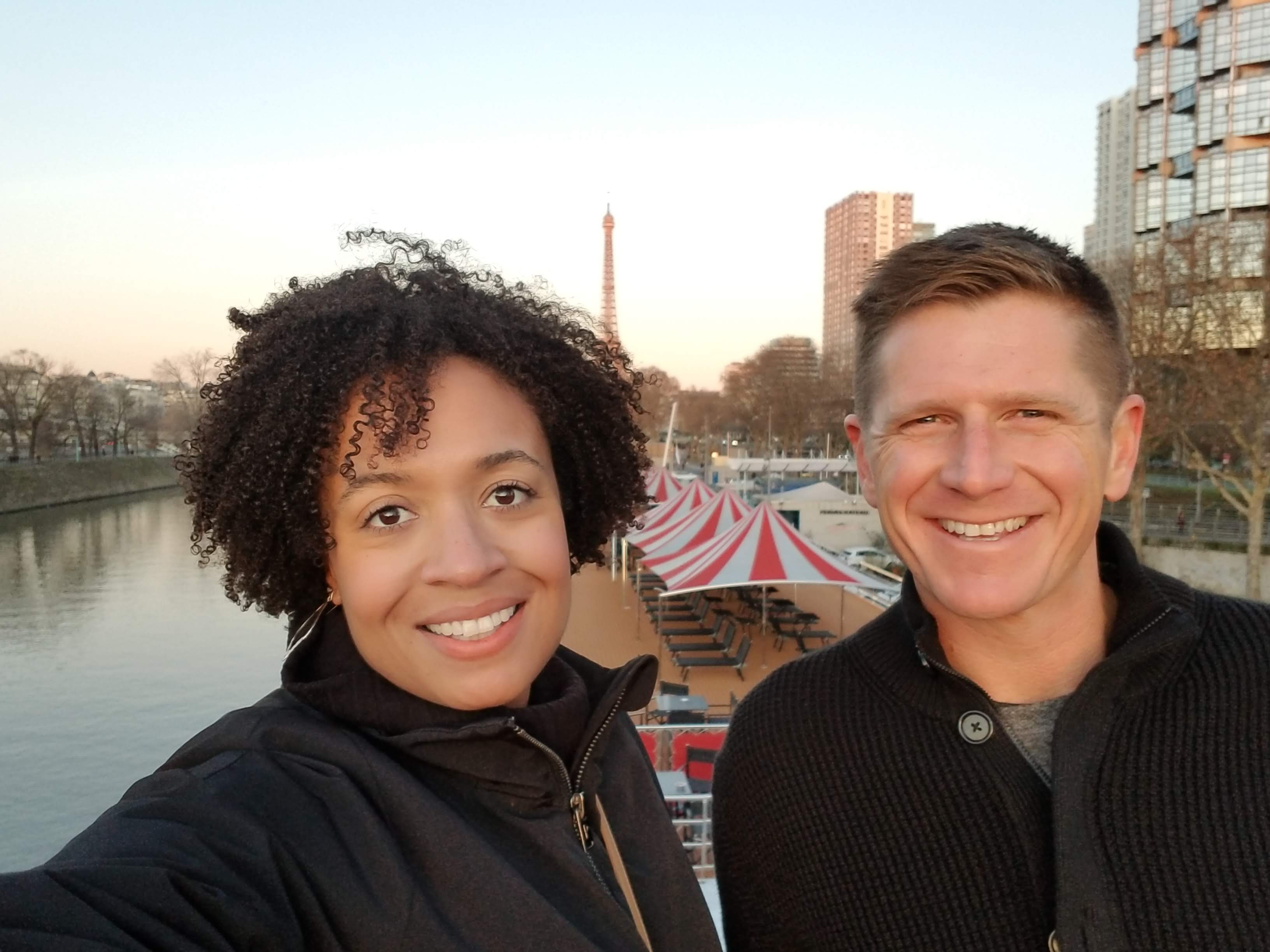 My husband Ben and I were celebrating our 10th wedding anniversary (a year and a half late). He had always spoken about how he would love to take me to Paris some day and share the places he loved from his time there in his early 20’s. I had never been to the City of Light. This is where we decided to celebrate ourselves and the 2018 winter holidays. We gave ourselves 11 months for planning. I don’t know about you, but I can stay excited about a trip for much longer than that. Ben, however, was not excited until about a month out. This made the planning for me a bit tedious. What did I do to combat this humdrum mood of his? I just let him be and planned this one 90% on my own. He was so busy with work and I wanted to keep up my mood and my momentum.

It really is a lot of pressure to plan a trip exactly how you want it and know that another person is depending on you to plan something they will love too. But I promise you, it is possible! It’s like baking a cake – do it with LOVE (cliche, I know). Since this was an anniversary trip I got to plan with the accomplishment of 10 (11.5) years of marriage in my mind. And since it was Paris, there was really very little I could get wrong. But 11 months is a long time to research, book, cancel, re-book, and second guess yourself.  That’s okay. Plan with your love of whatever is prompting you to travel and everything will fall into place (and whatever doesn’t, it was not your fault).

The trip solidified into a night in Paris by the Eiffel Tower, eight days on a boutique river cruise along the Seine, five more nights in Paris, taking us from December 19th to New Year’s Day. What a magical holiday it was going to be.

San Jose to Heathrow; Heathrow to Charles de Gaulle. I highly recommend British Airways. Both flights were very comfortable, even in economy. Plenty of legroom, very attendant staff, and even tinted windows. I also could not get enough of Heathrow Airport in London! It’s not the easiest to navigate, but they sure know how to catch your eye and your wallet while you wander around in search of your gate. Just make sure you have a nice long layover. 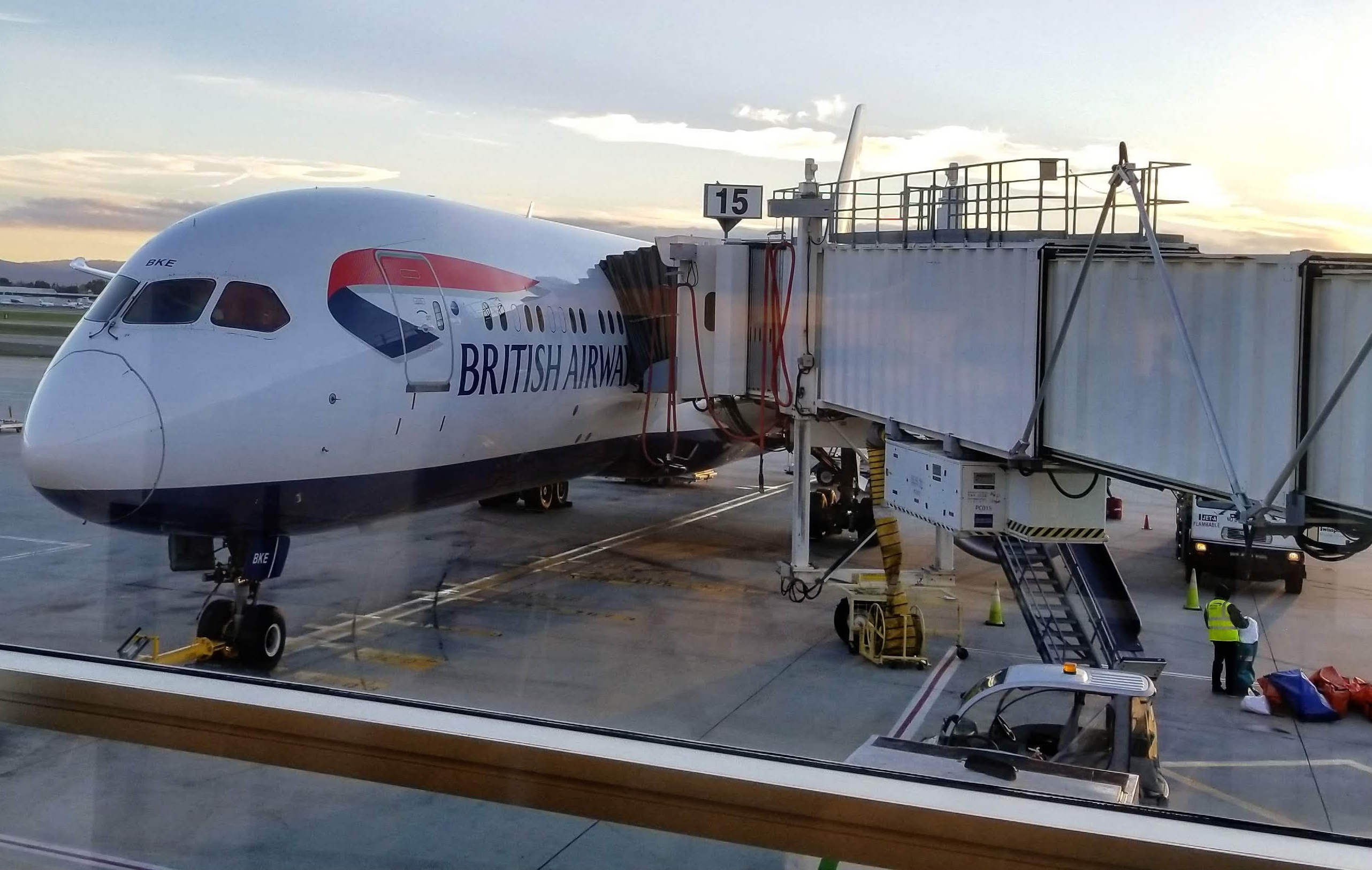 Once we landed in Paris, we took the Metro into the city center. It was fast and easy. Until we got off at the wrong stop. After seeing that the escalators back down to the rails were not working, I vowed to not carry my luggage back down by hand. No worries, Uber can save the day in Paris! It also turned out to be a great way to see the city and take in a few sights. Our driver’s name was Ben, same as my husband, and he was happy to point our all for the sights and answer my litany of excited questions as I caught my first views of Paris from his backseat. The first thing I saw when we got off the train was Notre Dame Cathedral. I just about peed my pants! 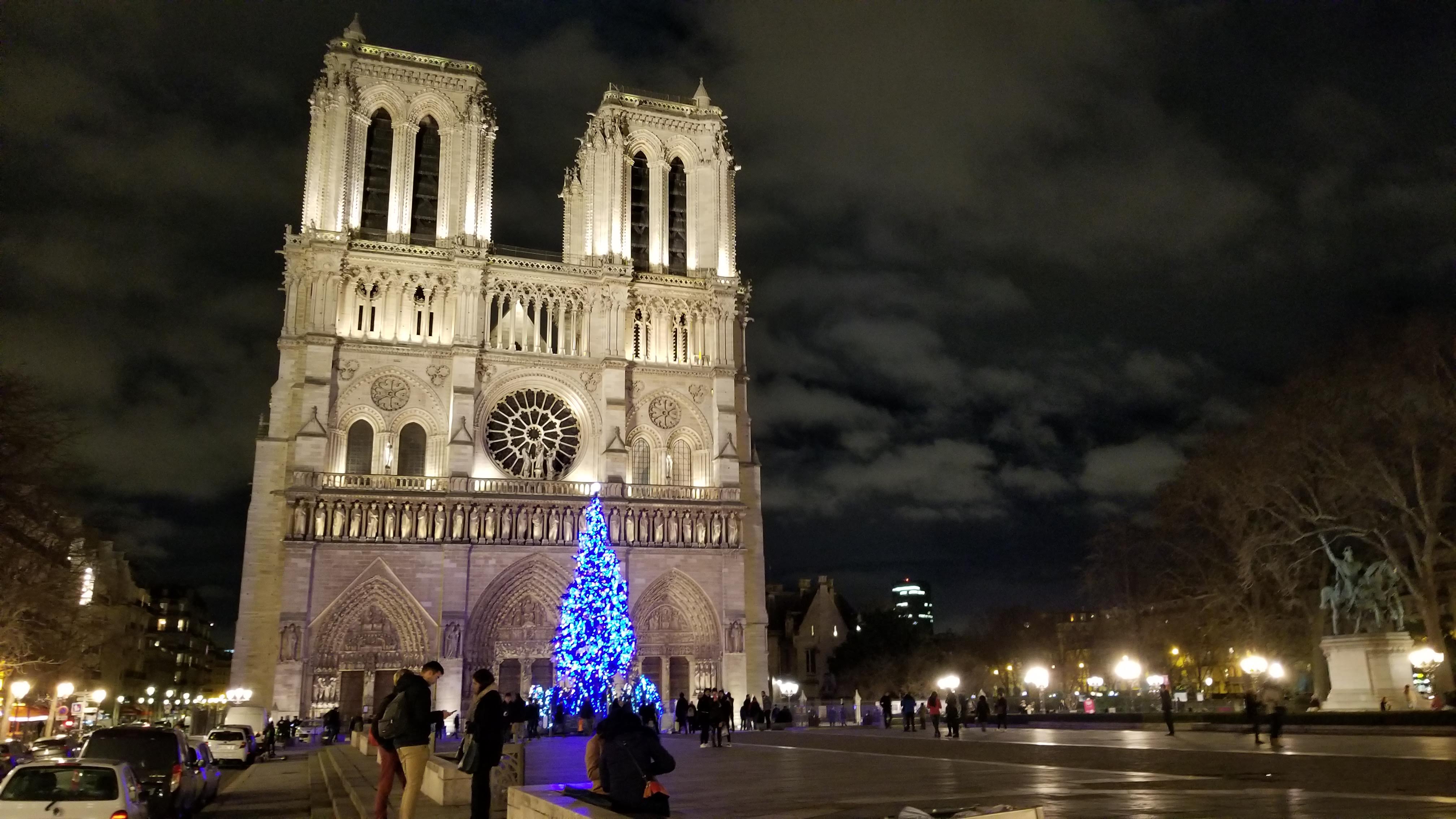 In the Uber, we saw the Louvre across the river, the Musee d’Orsay, and the Grand Palais. But I was totally unprepared to see the Eiffel Tower out of the window. I mean, I knew it was going to be there, but it still took me by surprise. Bright and tall and demanding your attention. 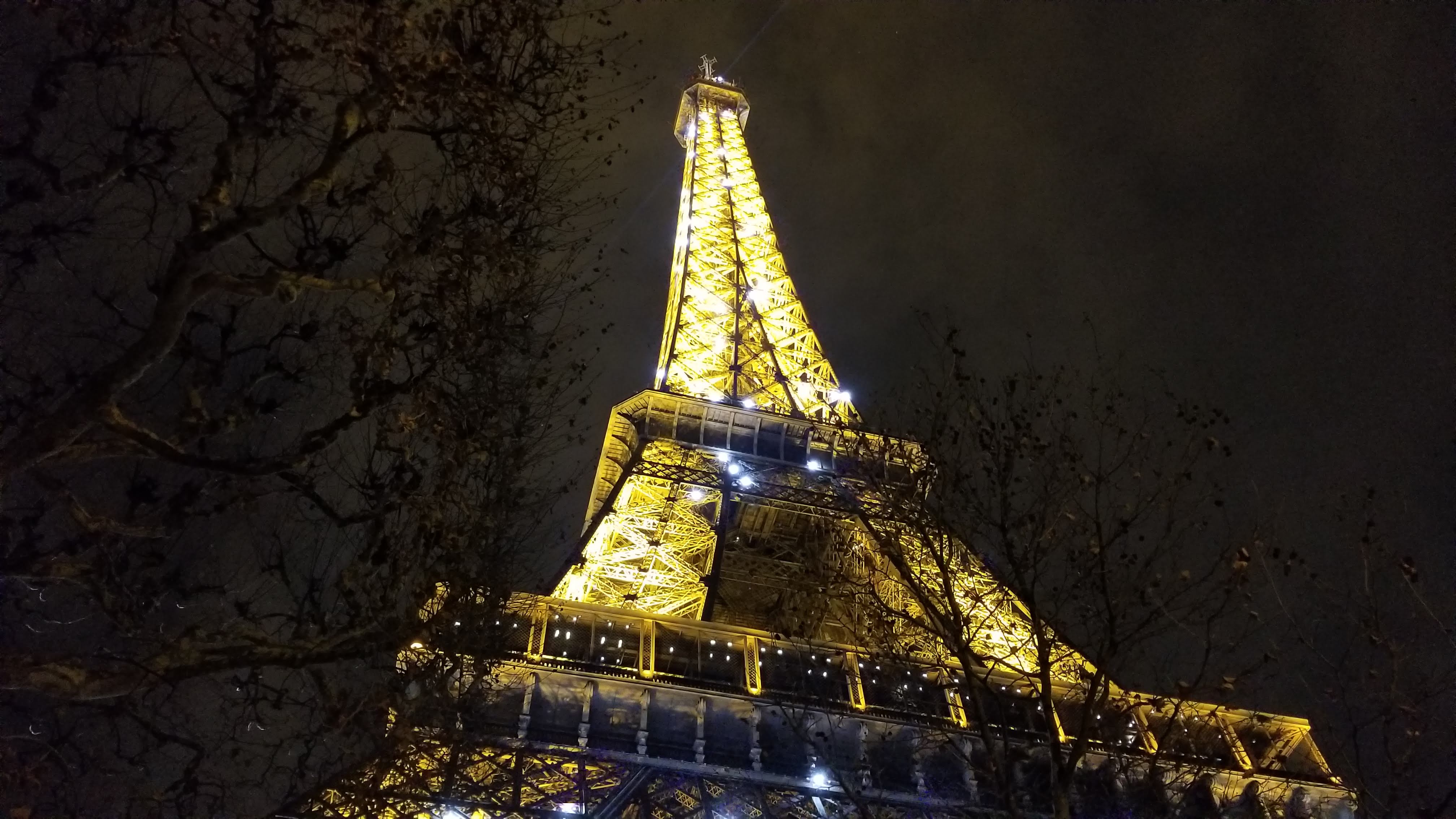 Just a few short blocks from the tower, we were dropped off at our accommodations for the night. We were staying at the Hotel Eiffel Seine. Decorated with Gustav Klimt prints and a classic Art Nouveau style, the hotel welcomed us warmly. They even have a resident cat that lounges in their lobby. Our room had a view of the Seine river and a busy street corner featuring public art works and people selling tiny miniatures of the Eiffel Tower for your desk or your keychain. The room was small in a European way, but very comfortable. There was a French balcony that I hung out of to greet the city I’d been waiting so long to get to. Cherry on top of this hotel, you ask? Free European breakfast when you book through them! They have, by far, THE BEST orange juice I have ever had in life. I am not exaggerating; I don’t even like juice very much and this OJ was beyond delicious.

The night was young so we asked the concierge for a dinner recommendation in the area. He sent us to an off the main drag locals’ haunt – Comptoir Principal. Our first Parisian cafe experience. I tested out the little bit of French that I know and failed miserably. Our server didn’t speak much English, but we stumbled along together. I have a gluten intolerance that makes dining a challenge for me, especially in places where I can’t exactly read the menu. If you have a food allergy, be sure to learn whatever phrases you need to know to order smartly in whatever country you’re visiting. In France you can say “Je suis sans gluten.” This means “I am gluten free.” At this, I must take my own advice. The dish I ordered seemed like a safe bet, alas, it was not. Ben ate a fair portion of my meal. Nonetheless, our meal was very tasty.

We went for an after dinner stroll around the most famous landmark in the city so we could get an up-close look. The Eiffel Tower was just a few blocks away and the night air was calling.

Made for the 1889 World’s Fair, the tower was designed by Gustav Eiffel. He also designed the interior support structure for the Statue of Liberty. What a guy! The Eiffel Tower has become the quintessential symbol of Paris, drawing visitors from around the globe to ascend its 324 meters. And though I’m happy to climb to great heights for a view, the view I would have been looking for would have been the structure I was in. I was content to look up from below at the amazing sight that had been criticized so harshly at the time of its construction. It it truly spectacular. Bonus? She’ll sparkle for you if you ask real nice.

We were off to an amazing start.